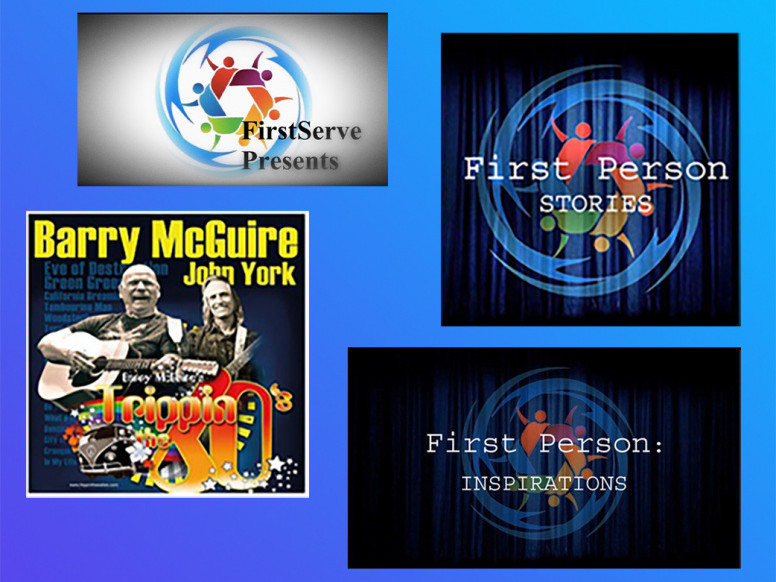 First Person: Stories” is an hour-long collection of personal stories and musical interludes, focusing on people’s inspiring and transformative experiences. In this series of true-life incidents, our presenters reflect on special moments in their lives, and how these experiences have impacted their values and self-understanding. The production is directed and produced by Jim Mueller and Thom Spadaro.

Recorded live, October 18, 2008 at First Lutheran Church and School in Torrance, California. Barry McGuire, known for the hit song "Eve of Destruction", and later as a pioneering singer and songwriter of contemporary Christian music, joins with Former Byrds member, John York ,"taking the songs and the truth that was in those songs from the 1960s and bringing them into the present moment... It's not a cover pack, it's us singing songs that we sung with a lot of our friends that aren't around anymore to sing them." ~Barry McGuire.

"Inspirations”, the latest in our “First Person” series of performance and interview events features performances of original songs by Ron Finn, a professional musician and Music Editor for CBS-TV's NCIS:Hawai'i, plus a few of his talented friends from across the country and the South Bay. The show also features, FirstServe 's own Executive Director Bill Hurst, adding some of his original music, accompanying himself on his "88-String Guitar". Along with the songs, Bill and Ron have a "Sit Down" to discuss the creative process, how Inspiration factors into it, and the spiritual dimension of it all, highlighting this engaging hour of exploration; and the quest to express the soul of inspiring people.

As always, all proceeds from ticket sales and donations support the work of FirstServe Community Services. Thanks for being a part of our virtual audience, and for joining us in the mission of “inspiring people, transforming lives.”

...and if you find yourself inspired to do so, at ANY time, during or after you watch the show, or even right now if you want... you can donate securely to FirstServe by following this link:
Donation