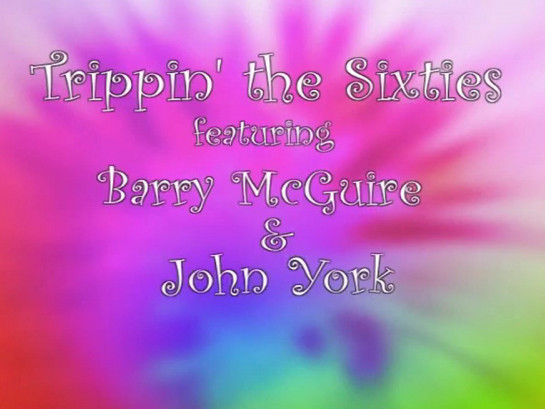 with Barry McGuire and John Yorkhttps://

Recorded live October 18th 2008 at First Lutheran Church  - Torrance, California. Barry McGuire, known for the hit song "Eve of Destruction", and later as a pioneering singer and songwriter of contemporary Christian music, joins with Former Byrds member, John York ,"taking the songs and the truth that was in those songs from the 1960s and bringing them into the present moment... It's not a cover pack, it's us singing songs that we sung with a lot of our friends that aren't around anymore to sing them."

You'll hear these iconic songs of the period: "Green Green," "The Times They Are A Changin' / Blowin' In The Wind," "Tambourine Man / Turn Turn Turn," "Eve Of Destruction," "California Dreamin'/ Monday Monday /Creeque Alley," "If You're Going To San Francisco," "Dolphins," "Everybody's Talkin," "What A Day For A Daydream," "Hair," "Do You Believe In Magic," "Green Back Dollar," "Joy To The World," "Reason To Believe," "If I Were A Carpenter," "City Of New Orleans," "Woodstock / Dancin' In The Streets," "In My Life," and more.

...and if you find yourself inspired to do so, at ANY time, during or after you watch the show, or even right now if you want... you can donate securely to FirstServe Community Services of the South Bay by following this link:
Donation